I write this blog from the perspective of someone who for most of his life did not consider himself to be a 'musician'. Musical, yes. A partaker in sessions, of course. A person who played the odd paid gig - absolutely. But not someone who was a musician.

And then, somewhere along the line, I stopped giving a fuck. There wasn't a single thing I'd prefer to be doing, and I thought one day, when I was playing music, "If I died tomorrow I'd be happy".

Well, not ecstatic. But at least I'd be happy that my last day was spent doing something that made me feel good, and maybe made other people feel good. And I'd have, around me, as part of the deal, the 'job', like-minded souls with whom I could have a meeting of minds.

But having a conversation with a musician is like two people talking on the Internet about the weather with neither of them knowing where the other is. Oh, and both of them unable to understand the other's language.

For example (and it's only one example), I still can't speak banjo. I've tried. I've had many good friends who played the banjo and spoke it proficiently, but despite their influence and much time spent in their company, I never picked up even the basics.

We had our friend Teemu from Finland to visit recently. He ended up playing with us because Luke couldn't make it. And he started talking to me about his banjo. I mean, I just said something innocuous like 'Nice banjo', and then he started telling me about it. No, really, he did.

But I don't speak banjo. It's like Italian - I don't understand the words, just the emotion.

I used to nod and look appreciative of the information, but life's too short. Now I just indicate by waving my hands toward my head, that this brain has all the banjo information it will ever require and that no more is needed.

Yes, I know. I act like a crazy person. It works though. Try it.

I feel Teemu's pain. I speak basic guitar myself, and I know that many cannot comprehend what I'm saying. Sometimes, say in a relationship, I might say something like: "Fuck you - there's better things to do in this world", and the other person would just hear: "I'm just going on the road for a few weeks."

It's hard. Communication is always hard, but it's especially difficult when the other person has a whole other idea of language and what it means. When I was just someone who liked music, it was easy enough to communicate simple ideas.

When music became my life, it became impossible - without defining each word as you went along.

One thing that is for certain. You definition is different from mine. Oh, so different.

You're right. I'm wrong. Yes, I've heard that before.

It doesn't matter which of us says that - it's true either way.

Someone said to me recently, "I love music - music is my life." Since I feel the same way, I asked them to elaborate. There was humming and hawing. So I asked again.

"Well, if I'm driving along in my car, I like to have music on."

"So if Mahler was on Lyric FM, you'd listen to that?

"When I say 'music is my life' I mean that the love of it, the playing of it, the work in getting it right comes before most things in my life. It means I have sacrificed people and things to play it. It means that music defines me and who I am.

What you mean is that you don't like silence in your car, you can't face boredom and in that case, you'll turn on the radio for inane jabber and the ten songs that are repeated endlessly and pointlessly on Irish radio."

A real meeting of minds.

And it's the same with the term 'musician', which is where I started. I take it to mean anyone who spends most of their time working on or in music. Anyone who does this thinks pretty much the same, in my experience.

People who don't work in music think of musicians as people like Ed Sheeran.

And therefore, if you're not packing out Croke Park every year, you are, by definition, a failure.

That's the basis for another wonderful conversation.

But here's the thing. And it's always, always true.

Music speaks for itself.

Am I this person?

Deep down, perhaps I always knew. And I knew that, possibly, other people knew as well. Obviously, people who saw me manifesting tendencies knew I had some inkling that way. But they never mentioned it to me, and I never discussed it with them.

It really is your own private business. There are things in life that are just implied. Euphemisms cover the embarrassing area. But people rarely call other people out on who they are. It’s just obvious to someone with red hair that they have red hair – why would you mention it?

Except in the case of my ‘hair’ I wasn’t particularly aware that I was a Red. I wasn’t sure. Wasn’t committed. I was prepared to accept aspects of my identity, but didn't want this particular part to be self-defining.

I hid it for years. Only participated in it when the opportunity presented itself. Never sought it out. Watched from a distance, sometimes. Always afraid that if I let this particular rabbit out of the bag, it would run forever, and I would never control it again.

'That's How I got to Memphis' is the story of how we all end up in places we never thought we would - driven by love, money or desire. This is how I got to my own particular Memphis - fighting with myself constantly on the way. While also heading inexorably to my mythical Memphis of self-realization and harmony.

Did there come a point when I stopped fighting it? Yes, that's a good story to save for later. But for now I want to share a story about my old friend and colleague Eamon Doyle - who taught me to accept some home truths.

At that time, I was playing with Eamon in McLoughlin's Bar in Dun Laoghaire. One night, I introduced a new song, and when I was done I said to him: "Sorry that wasn't the greatest, but I am, after all, just an amateur". 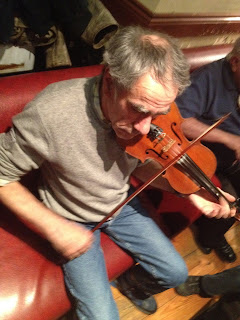 He thought about that for a while and then he said: "Do you think I'm a musician? Do you think I am worthy of that title?"


It's pretty good advice. Eamon was a hard man to deal with at times, but by the time I met him, he had forgotten more things about music than most people will ever know. I knew him, and he knew me, and I think he knew this thing about me. He knew who I was inside, and the life which I longed to live.

Music - and its etiquette, its people, its dizzying highs and shivering lows, its passion and romance, its complications, negotiations, its compromises, its smoky nights in small sheebeens. Music, classical, traditional, regional, temporal - what would life be? Without music?
at May 15, 2019 No comments:

I write this blog from the perspective of someone who for most of his life did not consider himself to be a 'musician'. Musical, yes...